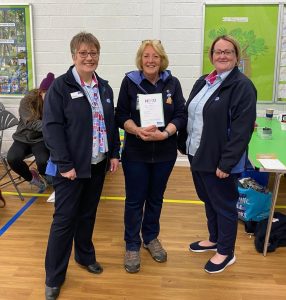 Sue Vint, Burley Group Guide Leader and a Wharfedale Guiding Commissioner is the first to be presented a Girlguiding Hero Award. This is an award for members or friends of Girlguiding who have done something special, and Sue definitely fits into that category!

After a very difficult year for everyone and circumstances we could never have imagined, now is a good time to show our appreciation to members or friends of Girlguiding who have done something wonderful that has in some way helped others, and that’s why this Girlguiding Hero award has been created. The certificate was signed by the chief guide, chief commissioner and county commissioner to show that throughout the organisation Sue’s efforts are truly appreciated.

County Commissioner Kay Bolton said: “Sue has been Guiding for over 25 years. She has been a constant support to all of her Leaders and volunteers in her roles as District and Division Commissioner, especially during lockdown. With her excellent communication skills she has encouraged all units to continue to meet safely, helping to complete extensive risk assessments and ensuring they are up to date with all the relevant training and information. Her constant dedication and commitment is remarkable.”

Congratulations Sue – very well deserved, from all of us here in Burley. 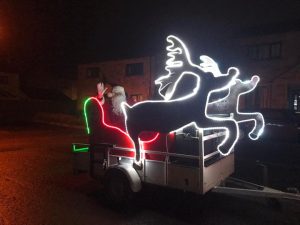 Being part of the local community is an important aspect of Scouting and Guiding in Burley. It was enormously rewarding to see that the 2021 Santa Float around the village raised around £1400 in donations which is being shared between the Scouts & Guides as well as two local charities in order to spread some Christmas cheers and help those less fortunate than ourselves.

Homeless Hampers provide essentials in the form of hampers to those who are in shelters or on the streets. As a charity they strive to challenge the public’s perception of the homeless and promote positive engagement with the vulnerable. Volunteers are always needed to help distributing hampers to those on the streets and to help in the local shelters and more information can be found on their web site

BEACON is a small charity which addresses the varied needs of the many people seeking asylum  who find themselves in the Bradford district. They aim to foster a culture of welcome and hospitality alongside the provision of practical support such as:

Father Christmas returned to Burley this year with a grand tour around the village collecting money for charities and for the Scout and Guide Group. How fantastic it was to see so many villagers  come out to wave & chat to Santa and his elves when they touredthe village! It was so lovely to see so many very enthusiastic & happy smiling faces & who were so excited to meet Santa.

A big thank you to all who gave a donation. Your astounding generosity raised about £1400. These donations will be shared between the Scouts & Guides as well as local charities in order to spread some Christmas cheers and help those less fortunate than ourselves.

Thank you to all for your support and best wishes for 2022! 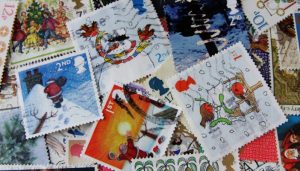 Will you ask your family & friends to save stamps for us?

A collecting box is in the HQ entrance.   Please pop your stamps in the box or in the post box outside the front door if the door is locked. We will collect till the end of January – so lots of time & lots of stamps!

How stamps make a difference

By collecting stamps you’re helping to break down the barriers that stop people with sight loss living life to the full. The RNIB accept all stamps: new or used, first or second class, foreign, first day covers, presentation packs or albums. Stamps are sold by weight and they raise £20 per kilogramme of stamps, so it’s a brilliant way to raise money.

Generally speaking the more modern the stamp the better. New issues by the post office are less likely to have been obtained by collectors and as such are more desirable. Many collectors want used stamps for the postmarks or cancellations so the odds of finding a newer issue that has gone through the post is considerably less likely than an older issue hence why these carry more value

Old stamps usually carry little to no value for many reasons. The post office have produced most series of stamps in huge volumes (billions) and as such there is an abundance of these stamps and by now all collectors will either have them or be able to obtain them very cheap. As a general rule RNIB suggest that most donations that are pre 2008 carry little value as a donation unless it is a special edition

Do the stamps need to be prepared in a certain manner?

Yes, the RNIB ask that people trim the stamps to leave an approximate margin of around 1cm around the stamps. This will ensure the perforations of the stamp aren’t damaged but will leave sufficient paper for the collector to hold and utilise. If stamps are donated with huge excesses of paper this will result in a reduced price for the stamps. We would like to stress that this is just a guide and doesn’t need to be exact and stamps that have been trimmed less or more will still be accepted 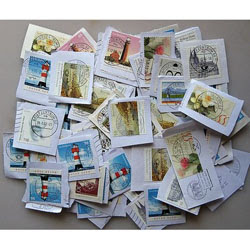 How does the RNIB make use of these funds to aid people with sight loss?

When you lose your sight, you can lose more than your ability to see. 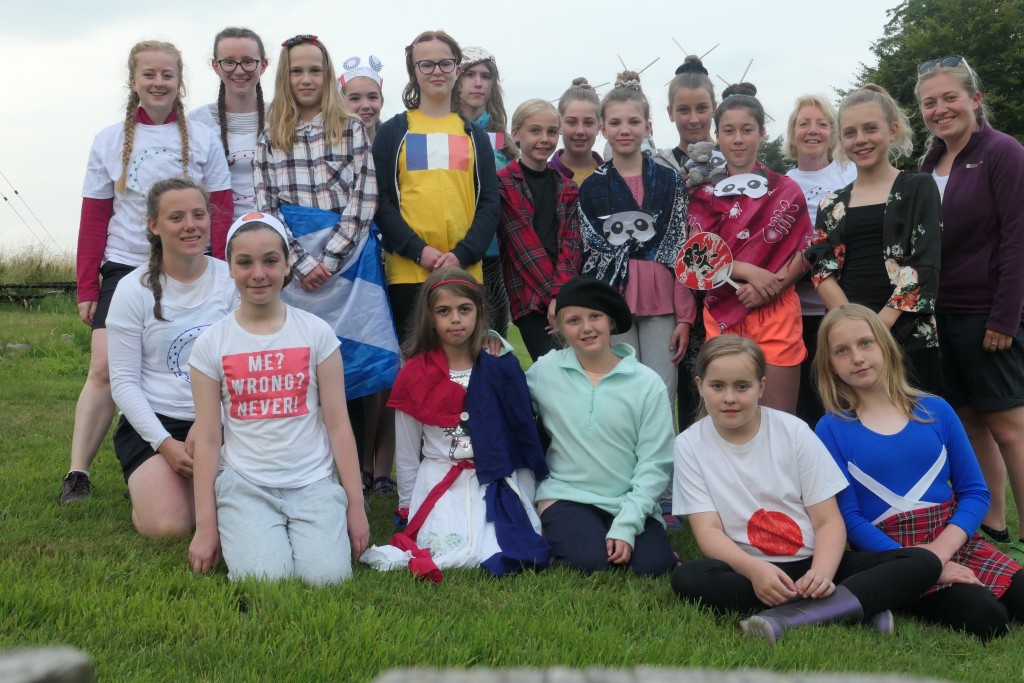 It is traditional for members of Girlguiding to go camping in the summer months.

It was feared that this may not happen in 2021 but we were wrong! Girls and leaders are made of sterner stuff and planning went ahead in anticipation of campsites being able to accept campers. Our faith was rewarded and we camped with over 20  guiding members under canvas.

1st Burley Guides went to Waddow Hall, Clitheroe (Girlguiding’s northern Activity and Training Centre) for five days. The theme was Olympics so all activities were based round the Olympic games. Each patrol was a country taking part in the Games.

Sue Vint, Leader said: “We went kayaking on the River Ribble, did zip wire, tree climbing and crate stacking.  We made fake wounds, played newspaper hockey, plus welly wanging and water team games.  On the last night of our camp it is traditional to have a fancy dress campfire – so all had to wear something that resembled their country.   There were some excellent home-made costumes!

Everyone took part in making meals, serving and clearing up.  Meals were cooked traditionally on a wood fire.   Guides also learnt to cook on portable gas stoves, barbecues & made a camp oven to cook fairy cakes.

Two Guides made their Promise during the tree climbing activity – one right at the top of the tree!”

Most Guides gained their Skill Builder Camp, stage 3 & 4. The Leaders agreed it was a very good camp and great to get back together after such a long time apart. The girls loved it & so did the Leaders!

The commitment of the Leaders is amazing – they followed all Covid instructions, completed complicated Risk Assessments and pulled out all the stops to make sure Girlguiding’s camping opportunities were not denied. The girls and parents responded admirably by conforming to all requests and ensuring that the events could take place safely and successfully.

Judging by parent comments, the girls had a fantastic time and parents were very appreciative of the Leaders having provided them this opportunity.

Members of the Scout & Guide Group entered the 2021 village Scarecrow trail.   The theme this year was nursery rhymes so we decided our scarecrow would be the rhyme  “The old Lady who lived in a Shoe”.

A few Sunday’s ago leader Lisa White organised an afternoon for us to make our entry at the HQ.  Guides & Scouts, Brownies, Cubs & Rainbows  arrived with their families to make the old woman & the children. There were some superb scarecrow builders & it was a lovely way to spend an afternoon. Imagine our delight when we found out that our entry had won the Organisations category!    Well done to everyone who took part, it was a great effort & lots of fun! 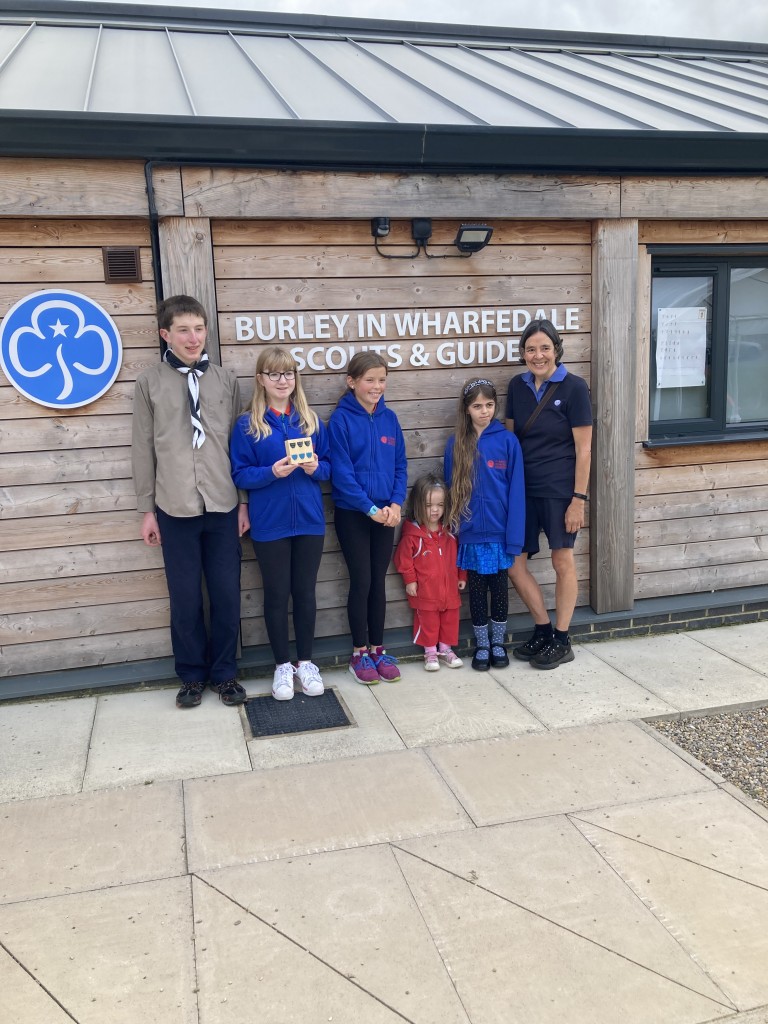 As COVID restrictions have eased, many of the Burley-in-Wharfedale Scout and Guide groups have already returned to face to face activities. Throughout the last few months all leaders have been planning safe and enjoyable programmes, operating within the parameters of national guidelines. The young people involved have been loving the opportunities to take part in activities, seeing other members of their groups, and having fun.

Guiding units are continuing to meet face to face: some inside, some outside. Where possible, units are also using other venues around the village to prevent clashes with units who want to use rooms at the HQ at the same time.  Groups have used Wynches Activity Centre, Sun Lane Nature Reserve, Burley Park & the Recreation ground. 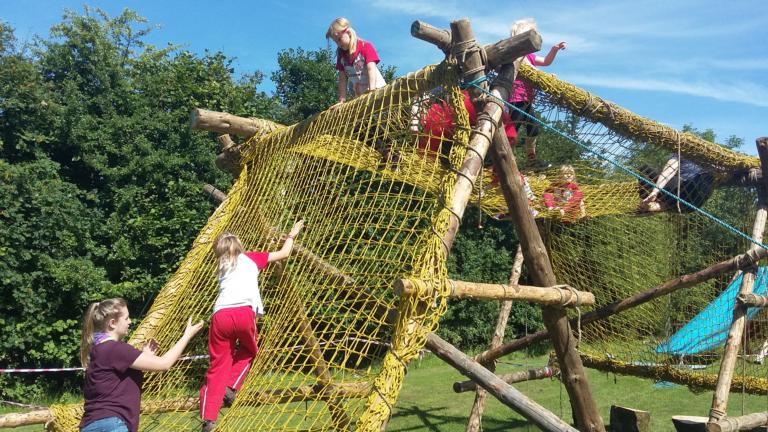 The Guiding units have been engaged in a variety of activities such as litter picking in Burley, geo-caching and run a village treasure hunt. Meanwhile the Rangers have resumed Duke of Edinburgh’s Award activities with expeditions for Bronze & Silver level.
Looking ahead, assuming restrictions are not tightened, 1st Guides are going on summer camp to Waddow at the end of July for 5 days, with over half the guides planning on attending.

In other news, Guide leader Cara Woods gained her Queens Guide Award in Feb 2020. The Queen’s Guide award is the highest award you can work towards in guiding. Although originally awarded to Guides, it is now only attainable by members of the Senior Section (including Rangers, Young Leaders and Leaders) aged between 16- 25. It is a challenging programme comparable to the Queen’s Scout and higher than Gold Duke of Edinburgh’s Award. Since the awards creation 60 years ago 20,000 young women have gained the award. Unfortunately due to Covid she has not been presented with it, so there will be a presentation in the grounds of our HQ for a small number of invited guests. Congratulations & well done Cara! 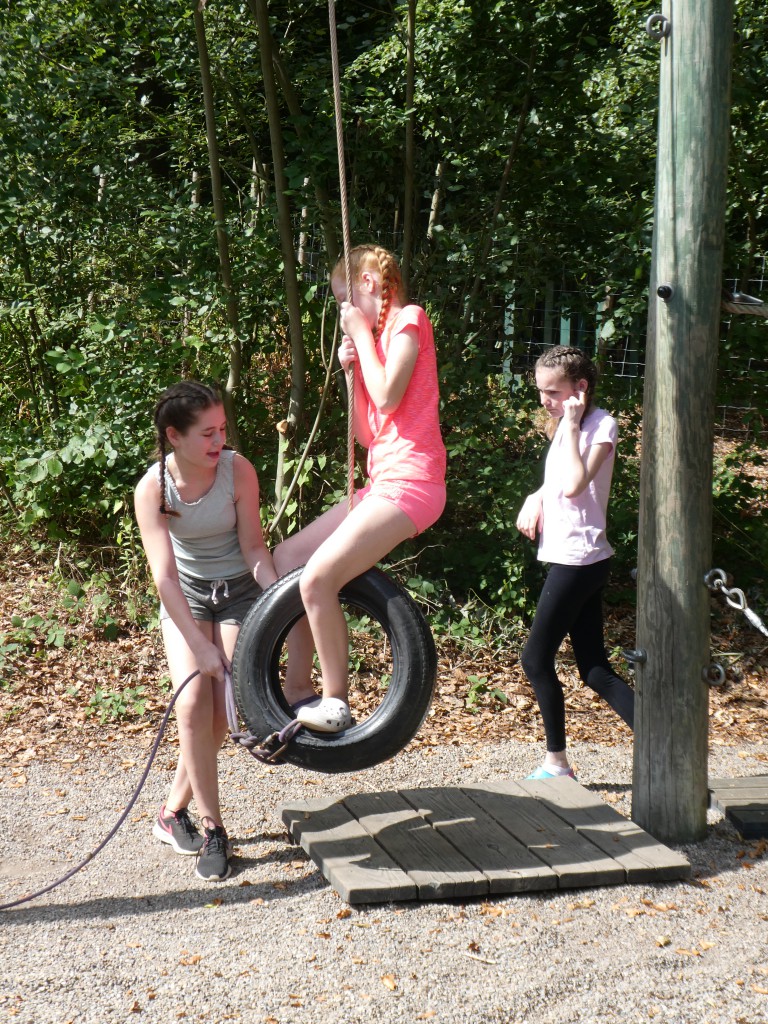 The Scouting groups have been similarly active. Most recently the Beavers been to Wynches Activity Centre in Burley for some outdoor fun, and the Scouts have been out at Reva Scouts Water Activity Centre near Bingley. Meanwhile the Explorers have got an overnight camp planned (in hammocks!) at Sconce. They are also planning on undertaking Duke of Edinburgh Silver Award activities in October.